The Final Two Months of Redistricting in SF 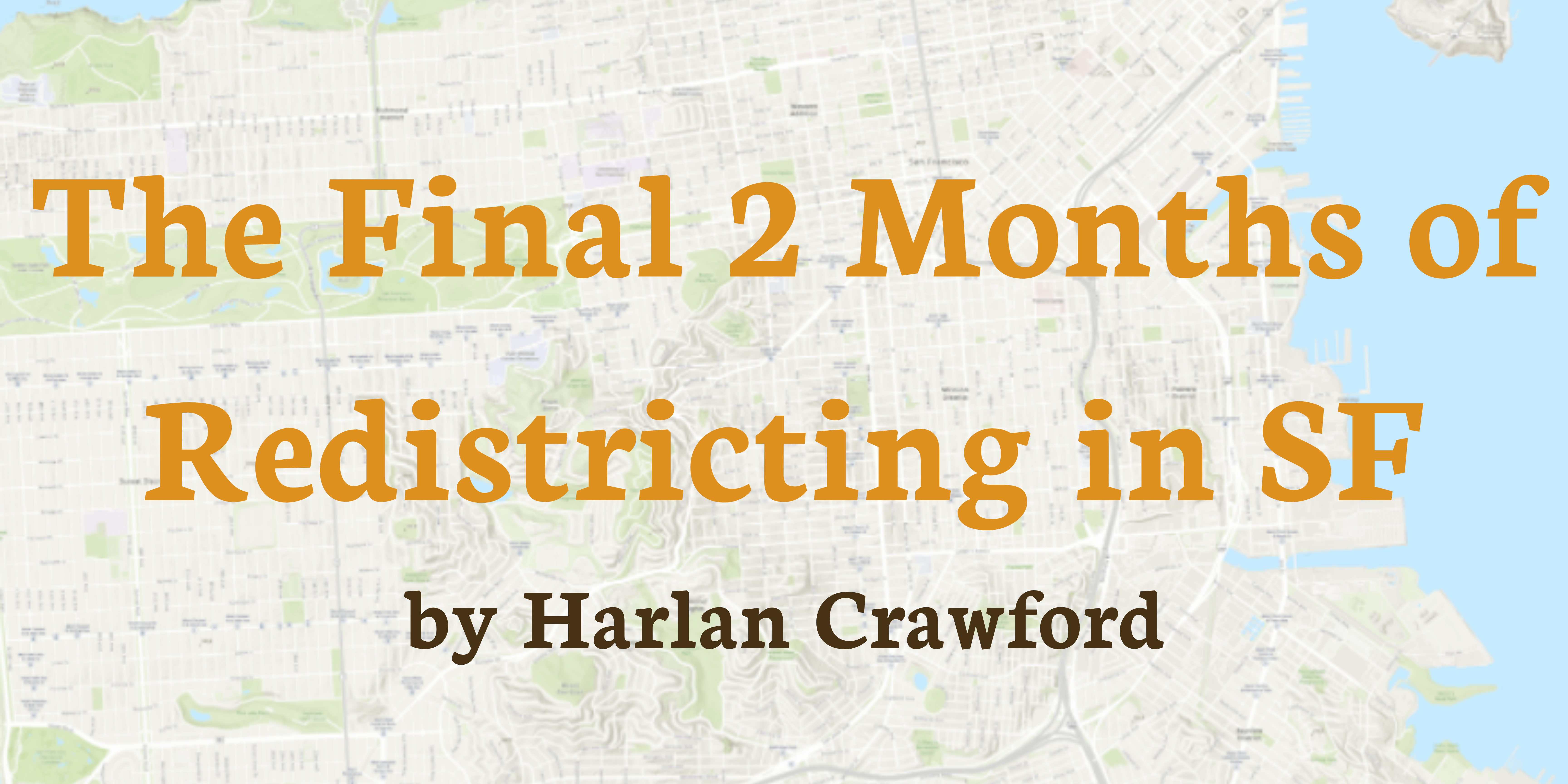 So far in 2022, it’s fair to say that the redistricting process has gotten itself off to a hot start. In just February alone, there have already been seven Redistricting Task Force meetings and there’s still one to go! The rapid-fire nature of this process will only continue to heat up. Check out the full meeting schedule here.

Attending these Task Force meetings gives us the valuable opportunity to speak out for our communities in order to create an equitable, inclusive map that honors working-class communities of color. The Redistricting Task Force meetings in February give attention to specific districts. Take, for instance, the Redistricting Task Force meeting that took place yesterday, February 23rd, 2022, where constituents of District 7 were able to hone in on their concerns and have a meeting dedicated to just their district alone. Residents can give input on maps or their communities of interest through public comment, where they can speak for 3 minutes. The Task Force can then use this information when drawing the new district map. Future meetings will be very similar to this for the other districts in San Francisco, but the Task Force will begin mapping at the meeting on March 2nd and then need to submit the final San Francisco district map by April 15th.

While it’s great to see redistricting get itself off to such a flaming start to begin 2022 with more meetings added and a set schedule from now through the end of the process, we know this is not enough to garner meaningful victories for the underserved communities that demand our attention.

Since redistricting is a process that moves boundaries, maps are always going to be central to redistricting. The problem is that there’s been a recently forming opinion on the Task Force that the drawing and release of draft maps needs to happen much later in the process. If maps aren’t gotten out to the public sooner, San Francisco’s underserved communities will have less time to come together, give feedback on the maps, and decide how they can advocate for their desired future. Because there must be a final map on April 15th, 2022, that only leaves 6 weeks between the start of the Task Force mapping on March 2nd, and the final deadline. We need to be prepared to use the final 6 weeks of redistricting to show up and give feedback on draft maps.

While it’s been great to see attendance at these meetings at around 40-60 people per meeting, a city of over 800,000 can do so much better, and it’s up to us to get the word out and make sure that all voices are heard in this redistricting process. In order to create an equitable map that serves our communities, we need support from all our community members in ways such as endorsing our Community Unity Map when it’s ready, sharing it with people you know, and ultimately urging the Task Force to adopt it through public comment and email. Together, we can amplify the needs and voices of working-class communities of color in the redistricting process by passing our Community Unity Map!