The student loan system was never meant to work for us 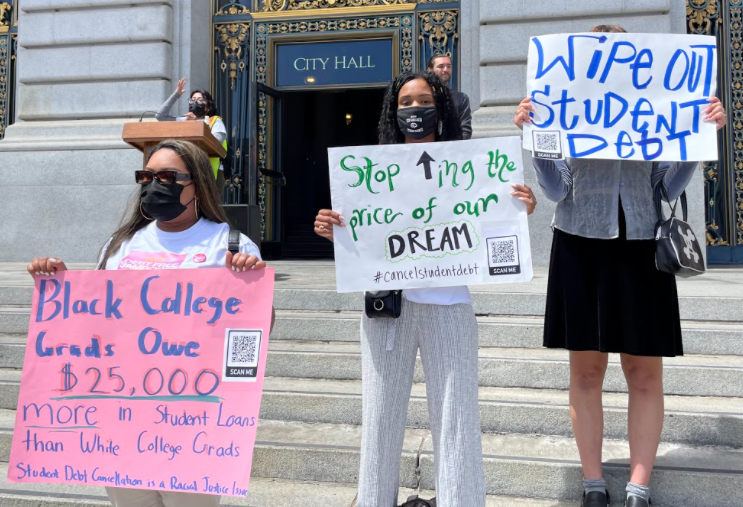 Student loan debt has become a major topic of discussion. Some people are advocating for an expansion of for-profit colleges which disproportionately harm BIPOC and lower-income communities, while many others are whole-heartedly repulsed by the notion of that and instead calling on President Joe Biden to cancel student loan debt and advocating for free college for all. As a City College of San Francisco student who has contemplated taking out student loans myself, I began to research more into our student loan system. I learned some surprising facts on how we got to this point of debt in the first place. Who was this system created for? What was the intention of the student loan institution and is it successfully giving what it should be giving? Let’s look a little closer at these questions.

Monasteries were the original universities. They were created to train up clergymen. It wasn’t until years later when universities adopted liberal arts as an option for students who wanted to seek a degree outside of a religious pursuit. Now students can get degrees in history, psychology, mathematics and other areas. This sounds great, right? But who was awarded access to these advancements?

The higher education institution was created for wealthy white males. It wasn’t until many years later through the National Defense Education Act and the Higher Education Act that veterans and lower-income students could also attend university with financial assistance.

Loans were created to get people into school to be trained for jobs like the space race a.k.a. Sputnik, and other fields that needed workers. Yet, these very same companies, businesses, and job forces evaded the responsibility of paying for these students to be trained in order to usher them into their money making machines. They’d rather profit off of an unjust and oppressive system that puts someone in debt than finance their own capitalistic system. Then, the businesses further profit off of the students’ individual and collective labor after they graduate and enter the workforce, oftentimes not adequately compensating the worker. So far, the higher education institution isn’t sounding like it’s giving what it should be giving.

Our government supported wealthy donors and institutions that encouraged people who wanted to seek higher education to take on borrowed money that would incur interest as time went on. Why should a student be charged for enhancing and sustaining someone else’s business? Not only are they paying for an education that will result in later creating financial sustainability for a business –  not as nearly as profitable for the worker – but the student is also paying additional money to what was borrowed. So they are paying the educational institution and they are paying the lender. Punish the student, reward… everyone else – the university, the lender and ultimately the employer. Nationally, the minimum wage in America is still $7.25. Even making $16-$18 an hour also isn’t an adequate hourly rate to support a working person in today’s society – especially if they are living in higher-priced cities like New York, Seattle, or San Francisco. That rate is a drop in the bucket for a company like Amazon. How is this morally just? Is this morally sound to you?

This system works for the wealthy. They can afford the ongoing additional costs of college. Now let’s consider the low-income students. If their income generally covers basic needs and not much else, or if they struggle to meet their basic needs, then they seek out a higher education to lift themselves out of poverty or out of a lower socioeconomic status and into a career that will further support those needs. Though, there are strong arguments that a college degree has not been much of a success for many Black and other people of color because the money they had invested into obtaining these degrees has not rewarded them with the same payout as their white counterparts. This is doubly true for Black women. Black and Brown students have ultimately invested in the debt system for a degree or certificate that will never pay off what it promised. Imagine needing financial help and being flung into an inescapable debt in the process.

Someone who is on a fixed income or makes an unsustainable wage cannot elevate to a higher-paying job when those jobs require college degrees that are simply inaccessible. They cannot afford to receive such a degree, or dedicate such an amount of time to study when they need to prioritize meeting their basic needs just to get by. This institutional system aids in the financial oppression of lower-income people. Student loans are not only the wrong solution but they are also a predatory practice that needs to be replaced with free education. Loans that have been taken out need to be canceled through executive action by President Joe Biden, and colleges need free tuition, free books, and free resources for all students.

Some believe it is the American way to “pull yourself up by the bootstraps.” This mindset already sets the precedent on how backwards we are as a society. The phrase to pull oneself up by their own bootstraps was in fact originally stated as an oxymoron. You can not lift yourself up while pulling a strap from your feet. To be lifted up this way someone else would literally have to do it – which is the main point here. In order for education to be equally accessible and attainable for everyone, we need our government leaders and decision makers to acknowledge that we need them to pull us up by the bootstraps by canceling student loan debt and making education free! The old system isn’t working for most students, it was never meant to. We are ready for a change!