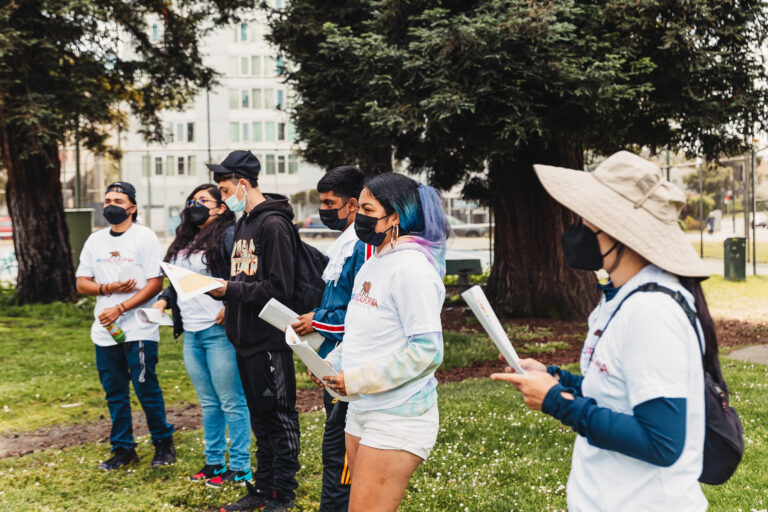 WHAT IS INTEGRATED VOTER ENGAGEMENT?

Bay Rising and our member organizations all use a strategy called integrated voter engagement (IVE) – an approach that research, as well as our own experience, has shown is among the most effective ways to increase voter turnout. Integrated voter engagement means integrating voter engagement with ongoing organizing and advocacy work – and not just reaching out to voters when it’s election crunch time. According to the Funders’ Committee on Civic Participation:

“The most effective integrated voter engagement organizations add new people to the voter registration rolls, educate voters about election issues, make sure new and unlikely voters actually cast their ballots, and ensure that misinformation and intimidation don’t inhibit people from voting. In addition, their work has a long-term impact by developing local leaders and involving people in shaping the public policy decisions that affect their lives.”

“Shifting public opinion doesn’t just happen when we talk to voters about one candidate or ballot measure,” said Sana Sethi, Communications and Civic Engagement Organizer for our local anchor San Francisco Rising. “We need to engage them on issues in between elections too to really see a paradigm shift.”

Sethi said that typically “campaigns don’t reach out to ‘unlikely voters,’ who can often include communities of color, so we are overlooked and made to feel like our voices don’t matter. That’s why we focus on voters who are less likely to turn out to vote, to build representation at the ballot box.” According to the Funders’ Committee on Civic Participation, “By bringing in new voters from underrepresented communities and keeping them engaged beyond election cycles, IVE groups change the political climate in cities and states, making new policy changes possible. For example, IVE groups have won minimum wage campaigns in 17 states and 15 municipalities, bringing more than $3 billion per year to more than 5 million workers.” Sethi added that instead of leaving working-class communities of color on the defense during elections, SF Rising created a “united front around elections [and] voter education to build political power” with these communities.

Our outreach to voters as voters doesn’t happen only during elections. Our groups collectively talk to voters year-round to build lasting change. For example, San Francisco Rising has experimented with deep canvassing, a method of outreach that centers on story-sharing and deeper dialogue than typical phone banking or door knocking. A typical campaign would require canvassers to have very short conversations, such as “Will you vote for X candidate?” or “support Y policy?” Deep canvassing, on the other hand, aims to shift opinions by connecting with the voter’s experiences, values, and background with issues. San Francisco Rising has held two deep canvasses so far, asking SF residents about what feeling safe means to them, with a goal of building support for alternatives to incarceration. This approach strengthens relationships with voters while supporting community participation in future policy and campaign work.

This strategy is also key to our local anchor Working Partnership USA’s work across campaigns. For example, during the Yes on Prop 15 statewide campaign in 2020, which would have reclaimed $12 billion per year for schools and communities, WPUSA’s voter outreach focused on ensuring volunteers came from their base in Santa Clara County and were voters there themselves. WPUSA also prioritizes starting with voter education – ensuring voters understand the issues and impacts they’re facing, then together identifying the solutions needed to resolve these issues. This method supports the building of relationships for future outreach and canvassing efforts — involving voters and community members from the beginning to the end of campaigning.  “[Integrated voter engagement] is about building power with a constituency of folks that have historically not had a lot of power,” Jessica Vollmer, Organizing Director for WPUSA, said. “Helping folks draw the line between the values that they have, what they want to see their elected officials represent, the decisions those elected officials are able to make, and how they impact our daily lives.”

For WPUSA’s work registering young voters, integrated voter engagement may look like connecting with student groups organizing around overlapping issues, and then hiring those students as a canvassing team. This ensures young voters are going into their own communities and having conversations with folks about registering to vote or specific ballot initiatives, connecting to the issue in a more powerful and personal way and shifting the power back to people who are directly affected.

Currently, WPUSA is reaching out to past supporters to have them engage their peers as a way to explore a renter-focused campaign in San Jose. “It’s always been really important to us to develop the leadership and skill in the folks from our communities to do work in our communities,” Jessica Vollmer said. “And that’s always been something that we have tried to build our work around: Who we’re having conversations with, and then who it is that we’re hiring to have those conversations when we have the opportunity to run campaigns.”