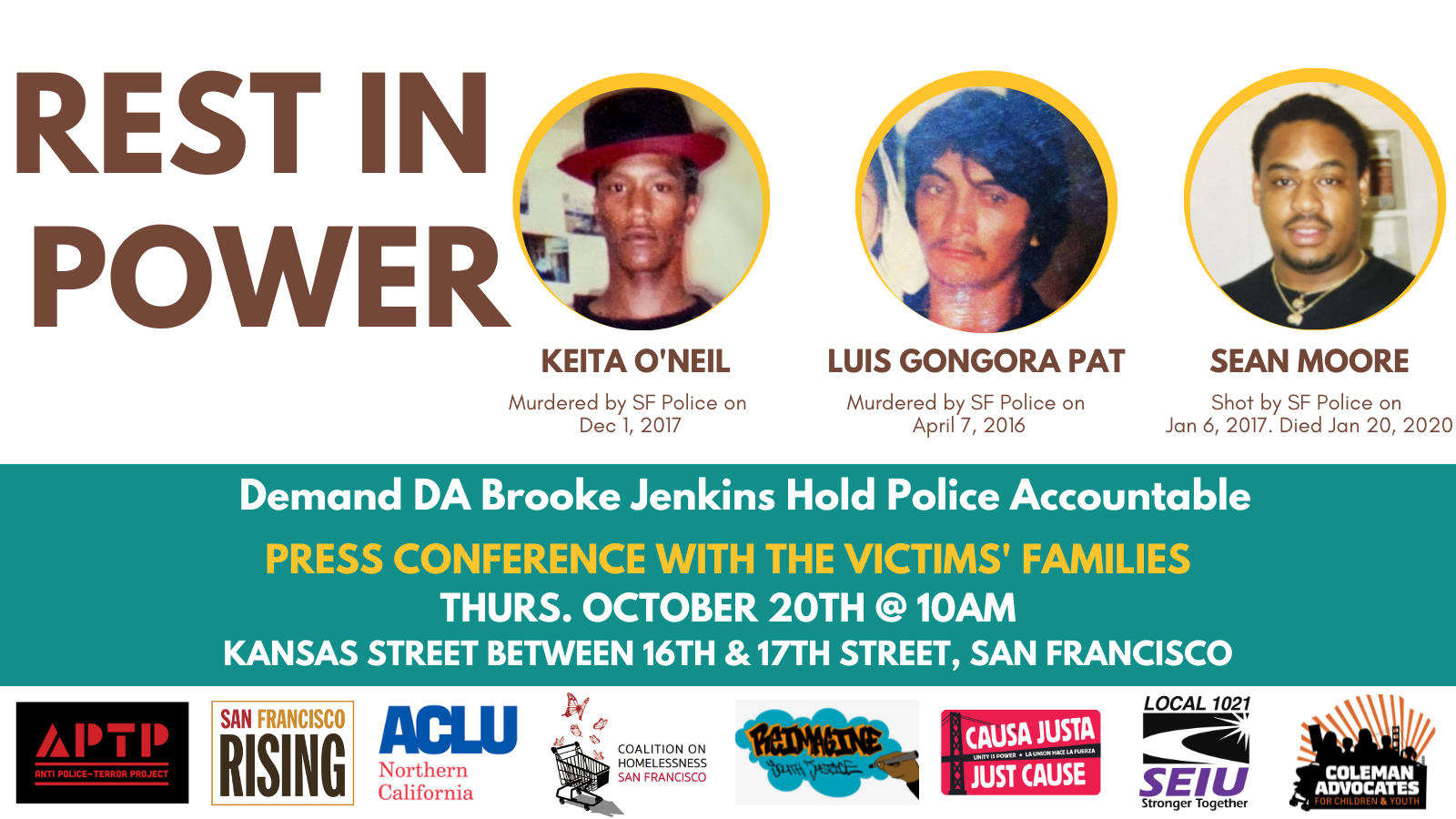 To the families’ dismay, D.A. Jenkins delayed the hearing in Keita O’Neil and Sean Moore’s shooting until after the November election and delayed bringing charges against the officer who killed Gongora Pat

SAN FRANCISCO – On Thursday, October 20th at 10am, the families of police shooting victims, Keita O’Neil, Sean Moore, and Luis Gongora Pat, will host a press conference and rally outside District Attorney Brooke Jenkin’s office to demand that Jenkins follow through with the prosecution of the SFPD officers who murdered O’Neil, Moore, and Gongora Pat. The victims’ families will be joined by community groups and police accountability advocates including the ACLU of Northern California, Anti-Police Terror Project, San Francisco Rising, Reimagine Youth Justice Coalition, Causa Justa Just Cause, Coleman Advocates for Children & Youth, SEIU 1021, and the Coalition on Homelessness.

WHERE: In front of the San Francisco District Attorney’s office at 350 Rhode Island, but please join us on the Kansas Street side of the building between 16th and 17th Street

WHY: The families of Keita O’Neil, Sean Moore, and Luis Gongora Pat are calling on District Attorney Brooke Jenkins to commit to prosecuting the SFPD officers who killed their loved ones. Since assuming her role as interim District Attorney, Jenkins has dragged her feet on prosecuting several police misconduct and use of force cases, recently telling O’Neil’s family that the case would be delayed until after the November election. The Moore family was also told that the case’s preliminary hearing would be delayed until after the election. She has also continually delayed the process of bringing charges against the officer who killed Gongora Pat. Jenkins subsequently terminated or demoted the attorneys who were working on these cases, to the shock and anger of the victims’ family members.

VISUALS: 20-30 attendees will be holding signs asking DA Jenkins to meet with the victims and commit to follow through with prosecutions.